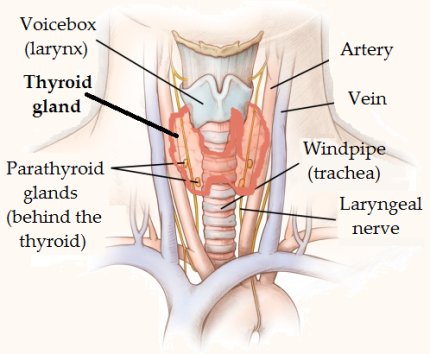 The thyroid is a small butterfly-shaped gland at the base of your throat.

It is a part of the endocrine system and ensures your body uses energy at the proper rate by secreting hormones that help regulate your metabolism.

If your thyroid is not functioning correctly, your metabolism may burn energy rapidly, hyperthyroidism or not quickly enough, hypothyroidism.

Hypothyroidism is a condition where the thyroid gland fails to secrete enough hormones into the bloodstream. These hormones control how your body’s cells use energy from food, a process called metabolism.

Low levels of thyroid hormone interfere with the body’s ability to perform normal metabolic functions including maintaining your body’s temperature, heartbeat, how well you burn calories, the regulation of many chemical reactions in the body, maintenance of healthy cells, bones and muscles along with numerous other important functions.

If you don’t have enough thyroid hormone, your metabolism slows down meaning your body makes less energy and it negatively affects a cascade of critical functions.

Hypothyroidism affects around 10 per cent of women, based on conventional medical diagnosis, however a large portion of the greater population are thought to be either misdiagnosed or even undiagnosed due to current medical practices. More about this later!

The prevalence of hypothyroidism rises with age and although men are also affected, there is a much higher occurrence in women. Hypothyroidism can be either primary or secondary.

The information and advice given by Healed by Bacon is based on our experiences. We, by no means, claim to be medical professionals. We recommend conducting a careful and comprehensive due diligence process based on your individual circumstances.